We’ve now completed an extensive and carefully illustrated White Paper for this NEH-sponsored project, a large pdf of which you may find here. (26.5mb).

The White Paper describes the open-source software tool we’ve developed, and our reasons for wanting to forge a new approach to making digital tool for scholars. It also examines the implications of our approach for photography. After examining the history of landscape photography in the American West, we show how by stepping outside the photographic frame and unfreezing a photographs’s frozen instant, we can reveal many hidden aspects of photography and create new kinds of works.

Our first case study investigates the Richard Misrach’s canonical Desert Cantos series, which proved to be a difficult but exceptionally rewarding test case. In October 2009, we worked with Misrach at two of the original sites for the Desert Cantos. 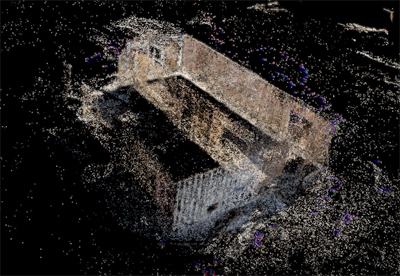 At the first site, we reconstructed the ruins at the once-flooded edge Bombay Beach on the Salton Sea in southern California, where there remained enough landmarks for us to match our spatial reconstruction of the site to Misrach’s original photos. 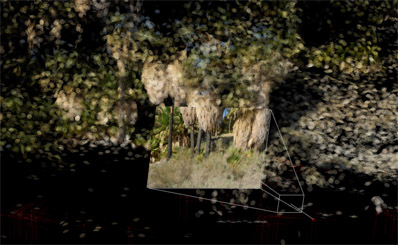 At the second site we spatialized a stand of palm trees that was the subject of several of his Desert Fires photographs. 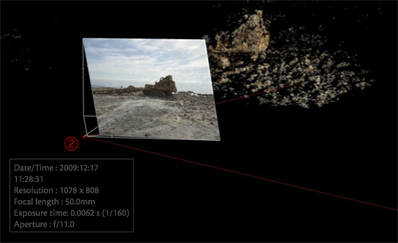 We also reconstructed the process of one of Misrach’s works in progress, spatializing his attempts to photograph a decrepit bulldozer at the edge of the Salton Sea. We track his path over the time of his shoot and his framing of the subject.

The second case study examines battlefield photographs of Okinawa, 1945; the third prototypes a simple pipeline for scholars by which they make a 3D capture of an object using just the video capabilities of a smartphone and a laptop computer.

Finally, the paper presents two hypothetical projects that our approach would underpin. These would create new kinds of interdisciplinary works that tie photo reconstruction to extensive data-mining, and would blur boundaries between the arts, humanities, and sciences.