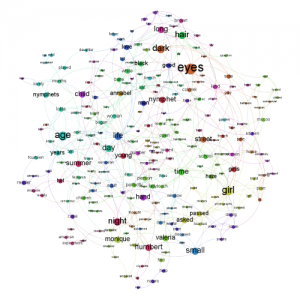 As applied to writing studies, text network analysis (TNA) is a method by which a researcher can trace the circulation of meaning within a text.

Meaning is generated when different pieces of information are related to one another in some way; naturally, though, bits of information can only be seen as relationalaccording to some system or ontology. For instance, the string of phonetic sounds [k æ t] relies for its meaning on the system of English phonology (as well as the English lexicon).  Within this system, when my vocal tract strings together the different sounds [k], [æ], and aspirated [t], I generate meaning because the different sounds relate to and work with one another to create the English word, cat. On their own, those sounds are not necessarily meaningful; they become meaningful only in relation to one another within a specific system.

Any text will draw upon many systems to create meaning: syntactic, graphemic, cultural, et cetera. TNA is all about teasing apart the different strands  to discover what is connected to what, and to see where the clusters and paths of meaning lie. With it, we can also follow the path of a specific word or idea, and locate its place within a larger network of words or ideas.

For example, we may want to track the circulation of a popular quote, say, “Mission Accomplished” between the years 2003 and 2010. Such a project should not be satisfied only with a description of inter-textual circulation, with a network map of who used the quote in a speech or text, what contexts were most often connected to its use, and who was addressing whose reference to it. The project should also delve into the speeches or texts themselves to discover the multiple ways the quote was actually used within those individual speeches or texts. Meaning is shuttled between one text and another, from one discourse to another. But it also generatesin different ways within individual texts and discourses. Each text can be seen as its own networked world. The inter-textual network does not end at the individual text; it simply changes scale, exiting the exterior network and entering the network of the text.

In my last post, I attempted a simple analysis of the partial network of the word ‘rhetoric’ in a specific corpus. I discovered what other words in the corpus connected most often to ‘rhetoric’ within a 5-word gap, and which words connected the most often within that gap (i.e., which connections had the most weight).

This time around, using Auto Map and Gephi, and following a methodology similar to the one described here, I created a network of all the lexical connections within the first 10 chapters of Vladimir Nabokov’s Lolita. (View the upcoming videos in full screen; otherwise, you can’t see the nodes I’m talking about.)