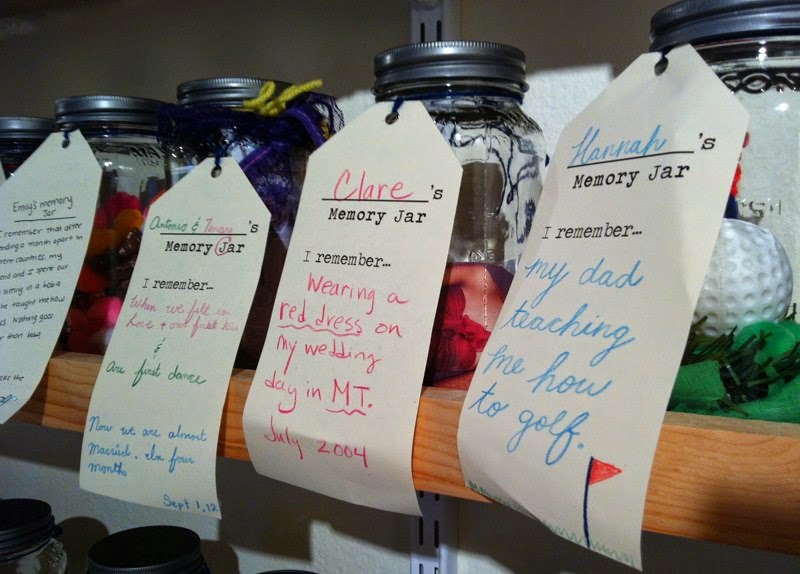 A man walks into a museum. He shares a story. He creates a visual representation of his story. He puts it on the wall. How do you measure the value of that experience? Two years ago, we mounted one of our most successful participatory exhibits ever at the Santa Cruz Museum of Art & History: Memory Jars. Over three months, about 600 people filled mason jars with personal memories and put them on display. Better yet, the graduate student who led this project, Anna Greco, documented the whole project and did in-depth analysis of the visitor contributions. This post shares some of the highlights from the project and from Anna’s research. I strongly recommend checking out her entire thesis [pdf] if you want to know more.

The Memory Jar project was simple. We filled a small gallery from floor to ceiling with shelves of Mason jars. We invited visitors to “bottle up” a memory in a jar, using craft materials to fill the jar with evocative objects and a hand-written label to tell their story. There were no written instructions, just a mural that suggested what to do and labels that prompted people for their name and memory. The project was linked to a larger exhibition, Santa Cruz Collects, about why local folks collect things. We realized that the most valuable things many of us collect are intangible–our memories–and the Memory Jar project was born.From the beginning, we observed pretty amazing experiences happening with the Memory Jars. People were spending a long time working on them. Some of the stories were quickies, but others were powerful and personal. We started with 400 jars and assumed we wouldn’t fill them all. Instead, we had to do a rush order on more jars halfway through the project.Two years later, this project is still one of the most fondly remembered participatory experiences at the museum–by visitors and staff. There was something special going on in that gallery. What was it?