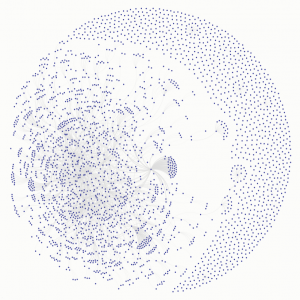 “I don’t know a lot about philosophy,” says Grant Louis Oliveira, a data analyst and quantitative social sciences researcher with an undergraduate degree in political science. He continues:

I’d like to change that and more rigorously explore my ideas, but I find the world of philosophy a bit impenetrable, and I don’t think I’m the only one…So we need a map. What I imagined is something like a tree arranged down a timeline. More influential philosophers would be bigger nodes, and the size of the lines between the nodes would perhaps be variable by strength of influence. Of course strength of influence needs a metric, but we’ll get there. I know that Wikipedia pages for academics and thinkers tend to have a field for “Influenced by” and “Influenced”, and it struck me that we could use Wikipedia’s semantic companion dbpedia to build our little map.

And so that is what he did.

Source: Editors’ Choice: A Visualization of Influence in the History of Philosophy