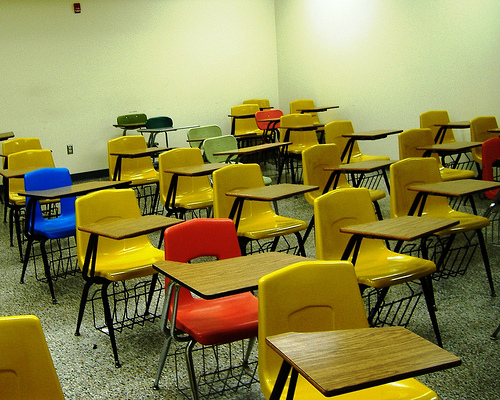 The panel “Critical Writing as Emergent Techne” worked with both criticality and technology, showing how both critical discourse and hands-on, constructive practices could reinforce each other in the college writing classroom.

Anthony Stagliano opened the session with a paper that situated “critical making” as a position that works to avoid both the “Scylla” of self-destructive or naval-gazing skepticism/criticality and the “Charybdis” of an over-excited indulgence in technology in the classroom simply for the sake of technology. The critical maker, Stagliano said, looks at technology with a subversive but playful eye, looks to see how the technologies work, how they can be opened up and modified, how they may be used to challenge the status quo, and how they can lead to perceptual shifts in conversations, in what can be done, what can be seen. “Critical making at its best is affirmative rather than negative,” Stagliano said; it’s about affirming possibilities, seizures, and perversions.

Bree McGregor offered her take on critical making in a video that explored her work with critical making in an online class. McGregor wanted to subvert common assumptions about online classes. Students believed that because the class was shorter, only a handful of weeks, and that it was online, there would be less rigor and less interaction required. McGregor sought to work against these expectations by involving the students in critical making exercises. In the class, students were immersed in “maker spaces” which demanded hands-on, tactile rhetorical constructs.