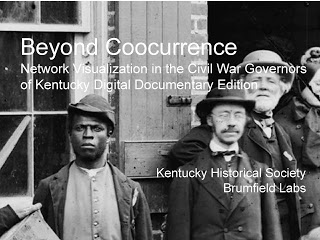 On August 10, 2017, my partner Sara Carlstead Brumfield and I delivered this presentation at Digital Humanities 2017 in Montreal.  The presentation was coauthored by Patrick Lewis, Whitney Smith, Tony Curtis, and Jeff Dycus, our collaborators at Kentucky Historical Society. This is a transcript of our talk, which has been very lightly edited.  See also the Google Slides presentation and m4a and ogg

The Civil War Governors of Kentucky Digital Documentary Edition was conceived to address a problem in the historical record of Civil War-era Kentucky that originates from the conflict between the slaveholding, unionist elite with the federal government. During the course of the war, they had fallen out completely. As a result, at the end of the war the people who wrote the histories of the war—even though they had been Unionists—ended up wishing they had seceded, so they wrote these pro-Confederate histories that biased the historical record. What this means is that the secondary sources are these sort-of Lost Cause narratives that don’t reflect the lived experience of the people of Kentucky during the Civil War. So in order to find about that experience, we have to go back to the primary sources. The project was proposed about seven years ago; editorial work began in 2012 – gathering the documents, imaging them, and transcribing them in TEI-XML. In 2016, the Early Access edition published ten thousand documents on an Omeka site, discovery.civilwargovernors.org. Sara and I became involved around that time for Phase 2. The goal of Phase 2 was to publish 1500 heavily annotated documents that had already been published on the Omeka site, and to identify people within them.