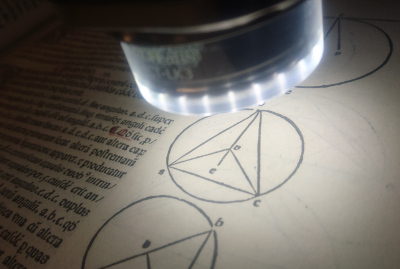 My last piece of work of 2017 was a treat, and worth resurrecting this blog for. Some time ago, Tabitha Tuckett in UCL Special Collections and I had a stimulating chat which sparked a handful of potentially intriguing projects. Today’s was to see whether we could find any interesting features associated with the printed diagrams in the margins of the first printed edition of Euclid’s Elements.

Euclid wrote the Elements in about 300BC and it effectively defined mathematics for the next two thousand years. He wrote it in Greek (some of it is probably a compilation of earlier works) and it was translated into Latin but it eventually became lost to Western Europe. Fortunately, it was translated into Arabic and found its way to a remarkable monk called Adelard of Bath who translated it (possibly three times) and other scientific works into Latin in the twelfth century.

The Gutenberg Bible was printed in the 1450s, but the earliest printing techniques were unable to reproduce the diagrams which were needed to accompany the text in the Elements. These are mainly lines, circles and arcs of circles. Text was printed with metal type, dropped capitals were added with carved wooden blocks and then the rubricator came and painted on the red (‘rubric’) highlights (I learnt a lot today!). That was all standard printing practice by the 1480s, but in the dedication to the first printed edition of the Elements, the printer (a chap called Erhardt Ratdolt) says that for the first time, he’d worked out how to print diagrams but wasn’t going to say how he did it. His methods are still unknown. It is believed that he used strips of metal which, as a printer, he would have had in his workshop, bent them to shape and embedded them in a supporting matrix such as wax. UCL Special Collections have a copy of the 1482 first edition (and the 1491 second edition and 400 others, many of which have been digitised).

The question that Tabitha posed was whether we could detect and image depressions in the page which resulted from the printing process which might give clues as to the methods used to print the diagram.