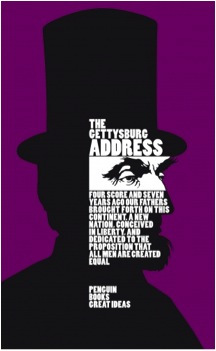 And now, why will you ask us to deny the humanity of the slave? And estimate him only as the equal of the hog? Why ask us to do what you will not do yourselves? Why ask us to do for nothing, what two hundred million of dollars could not induce you to do?

This is an excerpt from Abraham Lincoln’s speech on the Kansas-Nebraska act at Peoria, Illinois made on 16 October 1854. Powerful sentences. With imagination, we can conjure up a voice in our head, which we think would sound most like Abraham Lincoln’s voice to reread the quotation, with stresses, that we imagine he would have made whilst addressing the large audience.

A collection of Abraham Lincoln’s speeches is edited into book number seventy-two of the Penguin Great Ideas books, as part of a ‘collection of speeches from one of the great orators in history’. The cover (see image) is purple with a black silhouette of Abraham Lincoln’s portrait and opening lines of the Gettysburg Address quoted. The small paperback of only one hundred and thirty pages somehow manages to communicate a sense of purpose and importance to the reader, from its simplicity and perhaps from its position within the collection that Penguin has so carefully put together.

What is interesting about this little purple book is that the literature it holds was not written to be printed or published. It was written to be orated nearly a hundred and sixty years ago. The purpose of this literature today in the codex form is perhaps primarily as a written archive for the epochal speeches of Abraham Lincoln. However, it is also a book, a part of a literary collection, a piece of literary art and depending on how it is read, it could also be part of an autobiographical collection, a literary documentary, even as a philosophy or history textbook.

Digital Humanities is not a unified field but an array of convergent practices that explore a universe in which: a) print is no longer the exclusive or the normative medium in which knowledge is produced and/or disseminated; instead, print finds itself absorbed into new, multimedia configurations; and b) digital tools, techniques, and media have altered the production and dissemination of knowledge in the arts, human and social sciences.

Literature means different things to different people, especially in academia, where the traditional studies of literature would suggest the notion of ‘high art’ in fiction writing. In addition, some believe that literature cannot be just ‘writing’ and insist that literature must be something more specific, for example the novel in book (codex) form. Some literary scholars would also question the acceptance of other forms or writings like articles, journals, comics and receipts as forms of literature. Imagine the difficulty when electronic literature was introduced on platforms like the Internet, electronic books, computer games and other digital mediums. Where would they be categorised under, if not literature? Most digital humanities scholars use the term electronic literature, assuming a universal understanding that literature refers to written works (without discrimination), whilst traditional literary scholars tend to ignore the developments of literature in the digital platforms, considering them not be literature, but a different area of studies altogether.