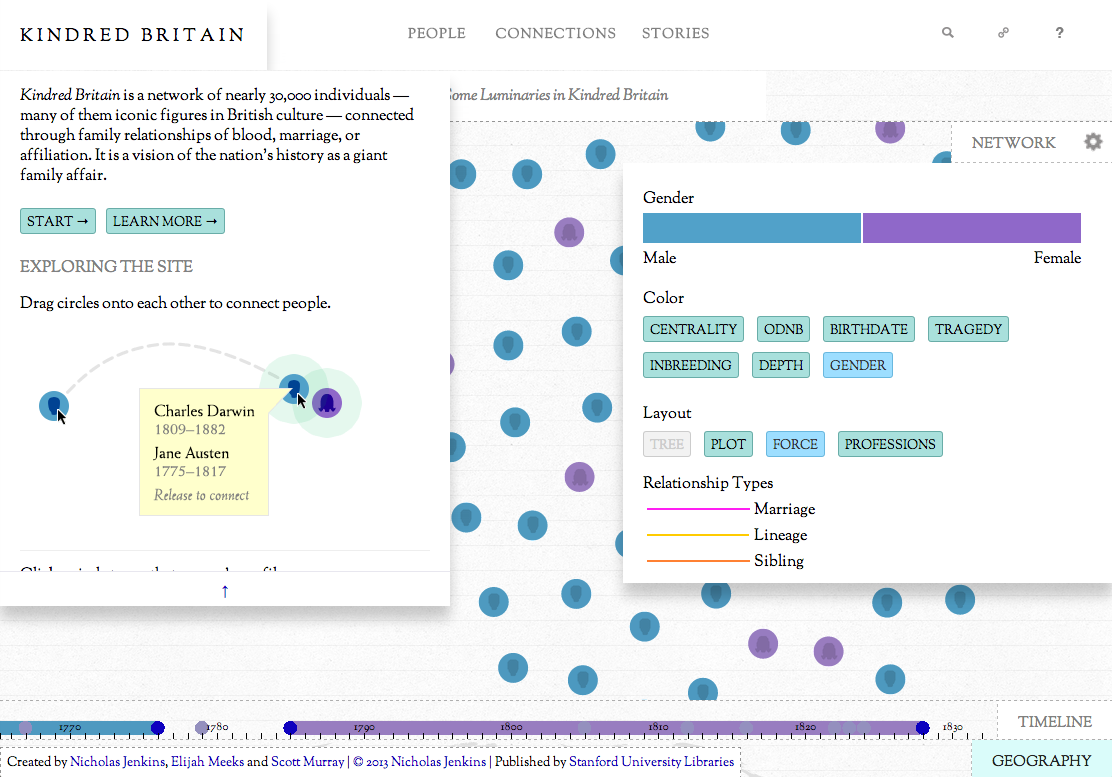 Today marks the public release of Kindred Britain, a new interactive scholarly work that explores the role of family in British culture. Integrating geospatial, temporal, and network information visualization, this project attempts to demonstrate the genealogical interconnectedness of the British elite. In doing so it expands the notion of Britishness, and the notion of society and culture in general, such that through family ties we can see George Washington, Napoleon Bonaparte, Sigmund Freud, and Kevin Bacon all included among these kindred British.

To achieve this took significant effort not only in writing code, but in envisioning how to present so much information of so many different kinds in a way that did not overwhelm a reader. I want to stress the concept of the reader here, rather than a “user” since to create a site like this one has to move away from the stereotype of the user with their short attention span and incapacity to grasp complexity. It doesn’t pay to create works for users, and buy into the myth that no one reads anything on the Internet and that a website has to be designed for someone with a ten-second attention span. Works like Kindred Britain and ORBIS not only include much flashy and interactive content, but vast quantities of text. There is an entire sub-section of Kindred Britain, known as Notes from Kindred Britain, dedicated to explaining in long-form linear narrative how the site was built and how it was imagined. Integrated into the main site are various stories, about cultural topics and technical, that are wired into the information visualization elements (a topic I’ll explore in detail at this years HTML5 Developer Conference). And each person in Kindred Britain is simultaneously displayed as a temporal signal, a geographic signal, a network signal, and an event signal, with this last aspect conveyed through text. Text is the critical component of Kindred Britain, and its integration not only into the site’s design and display but its very information architecture is key to its success in relaying to readers its vision of Britain.