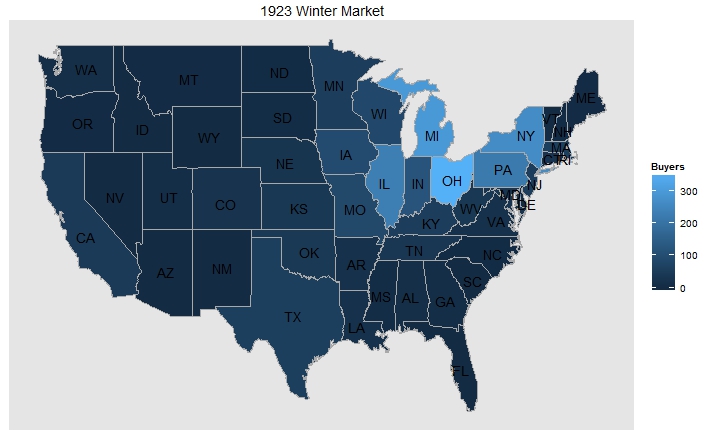 A few weeks ago, I presented to the UNL DH community about a project that I’m beginning while a fellow at the CDRH’s Digital Scholarship Incubator. The project is an effort to utilize digital tools to visualize business and organizational records related to my dissertation on industrialization in small cities. During my talk, I noted I was still uncertain as to what tool to use to create my maps, but thankfully, James Austin was also presenting. Afterwards he suggested I consider R and check out his tutorial on creating a density map in R.

Frankly, I was blown away how easy it was to create a map in R. His tutorial was easy to follow and acclimated me to R rather quickly. On top of this tutorial, I realized that the data I had used initially in Gephi already contained the coordinates for each geographic location and I would not need to clean up my data, reducing the number of steps even further. Convinced R was my new best friend, I began looking around for a way to create choropleth maps, which were another type of visualization I wanted in my project. I was thrilled to find someone had already done much of the heavy lifting and there was a packet that made the process so easy even I could create maps without pulling my hair out.

In the interest in helping out other n00bs, I’ve posted my steps in creating these maps below.

Source: The complete n00b’s guide to mapping in R