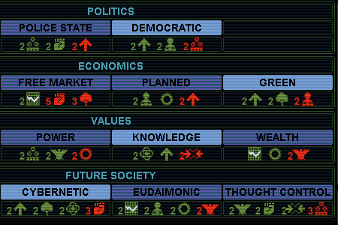 Videogames have an amazing potential for modeling societal processes.  At the same time, videogames also embody the worldview of their creators on a procedural level.  As such, it is a rare thing when a game is able to move beyond popular understandings of the world and approach it from a new and interesting direction.  As I’ve noted in my previous posts on the tech tree and the portrayal of science in videogames, most games that try to model technoscientific development do so in a very deterministic manner.  This isn’t terribly surprising, as technological determinism is still one of the most widespread ways of understanding the relationship between society and technology.  In spite of this, there are some games that subvert deterministic understandings of technology, and even some that could be said to approach technology from a more social constructivist perspective.

While I am glad to see game developers experimenting with mechanics that more closely resemble the Social Construction of Technology (and I hope that more developers do in the future), SCOT is not without its criticisms.  As Langdon Winner, one of the most outspoken critics of SCOT, points out, although constructivist writing shows how society influences technological development, it does so with “an almost total disregard for the social consequences of technical choice” (Winner, 1993).  While SCOT allows us to see the forces behind technological change, as well as the many technical solutions that were not adopted, it has little to offer us in terms of dealing with technology once it has taken shape.

In response to these criticisms, scholars in the field of science and technology studies have offered a up a number of alternative perspectives.  Of these, one of the most influential approaches is Actor-Network Theory.  Just as SCOT can be seen as a reaction against deterministic theories of technologies, Actor-Network Theory (or ANT) can be seen as a response to SCOT’s indifference toward the influence of technology on society.  In ANT, technologies are conceptualized as networks of interconnected “actors” or nodes.  These actors can be technical artifacts, knowledge systems, organizations, or individual people.  The connections between the nodes represent the ways in which they are able to exert influence upon each other.  One of the central assumptions of ANT is that every actor, whether human or non-human, has agency to influence other nodes in the network.