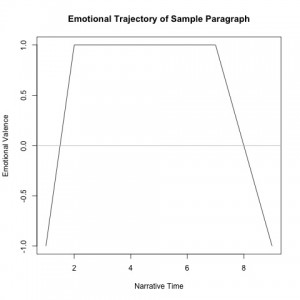 I’ve been watching the developments with Matthew Jockers’s Syuzhet package and blog posts with interest over the last few months. I’m always excited to try new tools that I can bring into both the classroom and my own research. For those of you who are just now hearing about it, Syuzhet is a package for extracting and plotting the “emotional trajectory” of a novel.

The Syuzhet algorithm works as follows: First, you take the novel and split it up into sentences. Then, you use sentiment analysis to assign a positive or negative number to each sentence indicating how positive the sentence is. For example, “I’m happy” and “I like this” would have positive numbers, while “This is terrible” and “Everything is awful” would get negative numbers. Finally, you smooth out these numbers to get what Jockers calls the “foundation shape” of the novel, a smooth graph of how emotion rises and falls over the course of the novel’s plot.

This is an interesting idea, and I installed the package to try it out, but I’ve encountered several substantial problems along the way that challenge Jockers’s conclusion that he has discovered “six, or possibly seven, archetypal plot shapes” common to novels. I communicated privately with him about some of these issues last month, and I hope these problems will be addressed in the next version of the package. Until then, users should be aware that the package does not work as advertised.