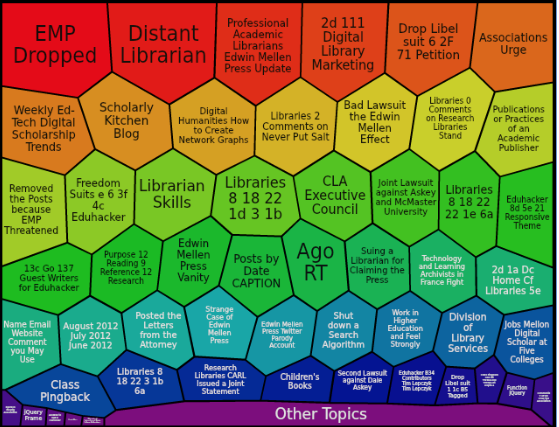 On 11 February 2013, Rick Anderson, a librarian and columnist for the blog The Scholarly Kitchen,
posted a detailed story of his most recent interaction with the president of the Edwin Mellen Press, a scholarly publisher that had recently accused another librarian, Dale Askey, of libel. The company
had filed a civil case against both Askey and his employer, McMaster University in Hamilton, Ontario, suing for a combined $4.25 million.The next month, Anderson’s initial post and a related post were removed from The Scholarly Kitchen. On 29 March 2013, Anderson posted an announcement thatthe Society for Scholarly Publishing, the site’s publisher, had received a letter from a lawyer representing Edwin Mellen Press (EMP) founder Dr. Herbert E. Richardson, demanding that the society remove two offending posts because they contained “disparaging comments about our [EMP’s] publishing program, the quality of our books, and attacked the character of our editor, Professor Herbert Richardson” (Amendola 2013; Anderson 2013). In such a rapidly evolving environment, we needed to act to ensure this material could be saved.