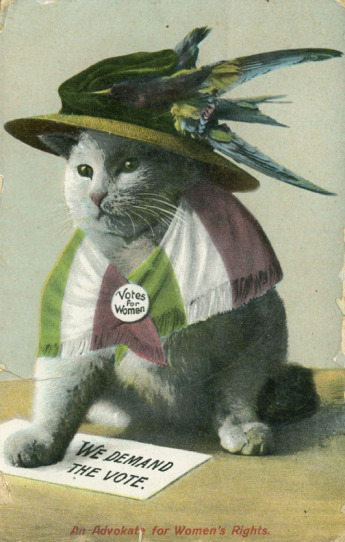 At the 2017 Australian Historical Association Conference, in a panel about digital history, Professor Victoria Haskins discussed what she described as a “replica archive.”  Haskins’ research is concerned with Indigenous domestic servants in Australia and the United States – women whose lives, she rightly notes, are often difficult to uncover in the archives.  Technology, however, has fundamentally changed the relationship historians have with archives.  Following the hours and hours of archival research undertaken across her long and distinguished career, Haskins has amassed copious photographs and photocopies which feature the voices of these women.  Bringing together these photographic fragments from many archives, Haskins suggests, creates a new archive – a replica archive.

The Suffrage Postcard Project can likewise be seen as a replica archive.  Women’s suffrage postcards, though considered ephemeral at their time of production, were numerous.  Postcard scholar Kenneth Florey suggests that more than 1000 suffrage-related postcards were printed in the United States during the 1910s and approximately 2000 in Britain.[1]  Suffrage memorabilia more generally was received enthusiastically by the American and British public, especially in the years prior to World War I.[2]

The majority of the women’s suffrage postcards were printed during the 1910s, a decade which would see the acquisition of qualified suffrage for British women in 1918 and the passing of the Nineteenth Amendment in the United States by 1920.  This era is broadly described by scholars as the “golden age” of picture postcards.[3]

But the partial nature of such collections, together with the geographical dispersion of the archives themselves, means scholars can only ever gain a fragmentary perspective.  Though archives such as these are partially digitized, they are often largely inaccessible to the public.  Aware of such limitations, Florey published his seminal work, American Woman Suffrage Postcards: A Study and Catalog (2015).  Bringing together digitally as many women’s suffrage postcards as possible, The Suffrage Postcard Project goes a step further.