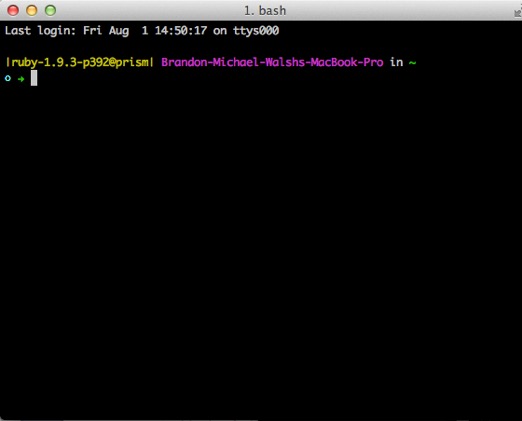 Alison Booth and I are co-teaching a graduate course this semester on Digital Literary Studies. As a part of the course, we’re having a series of technical workshops – command line, Python, text analysis, encoding, and markup. The scheduling worked out such that these workshops wound up being on Wednesdays, with the discussions of critical theory on digital humanities and literary method mostly on Mondays. That’s all fine and good, but I worried that neatly dividing the class out in that way would create a divide between the one day of the week when the students were actively discussing the material in the course and the other when they were mostly in hands-on workshops. Rather than having a hacking day and a yacking day, I wanted to see what I could do to create an environment for hack-yacking. So when I taught the first workshop on command line, I wanted to try something slightly different from what I normally do by making more room for discussion. I wanted to bring the Monday readings and conversations back into the Wednesday workshops.

Teaching programming well is very difficult. An easy, low-hanging fruit way to get the material across to your students is to connect your laptop and type in front of the students, explaining your keystrokes as you go and asking them to mirror your actions. Another approach I’ve seen (and used) uses slides to do something similar – sharing code examples and interspersing theoretical concepts as you go. Both of those approaches are all to the good, but they feel a bit too much like lecturing to me. I was trained as a teacher of English literature, which means that my bread and butter is the seminar. My approach to the discussion seminar has always been to act as something of a void in the center of the class, asking questions that get the students to engage with the material and each other more than with me. Lecturing has its place, I’m sure, but it generally makes me uncomfortable and doesn’t reflect the kind of pedagogy I value. So when teaching this workshop on command line I wanted to push myself a little more to see how much discussion I could incorporate into a technical skills workshop. How could I use this experience to help the students begin to think about technology as something that they could engage critically with? as something that was not so alien from their normal work of thoughtful, critical discussion?