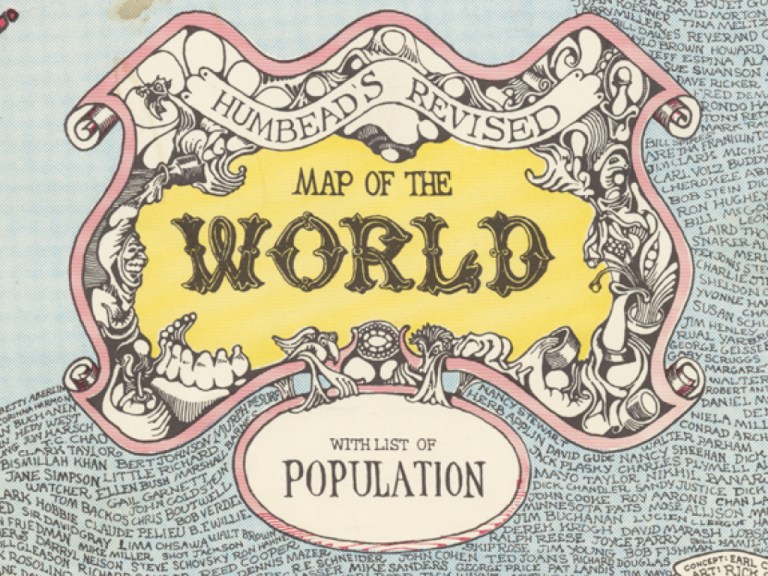 What would it mean to enter into the space of a map that itself reimagines the spatial relationships of the world?

The digital history project Revising Humbead’s Revised Map of the World: Digitally Remapping the Sixties Folk Music Revival explores a psychedelic mattering map from the later years of the Bay Area folk revival. Created in 1968 by Earl Crabb (affectionately known as Humbead, and later to become a computer programmer) and Rick Shubb (banjo capo maker, graphic artist, musician, and more), Humbead’s offers a sense of what the world looked like to participants in the West Coast folk revival. Think of the map as a precursor to Saul Steinberg’s famous 1976 New Yorker magazine cover View of the World from 9th Avenue.

In this project, I am curious about how digital approaches to a historical artifact can yield new insights into its significance and new access to its historical meanings and experiences. In addition to using digital mapping to contextualize this data-rich artifact (whose “list of population” contains over 800 names) as a way for scholars, aficionados, educators, and the public at large to access the history of the 1960s folk revival on the West Coast, I am also curious about whether virtual reality can offer new ways of exploring Humbead’s Map.

In other words, what would it mean to be able to enter into this reimagining of the world, full of information and data, and stomp around in it spatially and immersively?

So below, behold some (very!) early virtual reality experimentation. You’ll see the map and then we enter into it using Google Tilt Brush and an Oculus Rift headset. With the headset on, it’s more immersive than it feels in the video, but it begins to offer possibilities for how virtual reality can help us better access and understand the actual reality of the past.