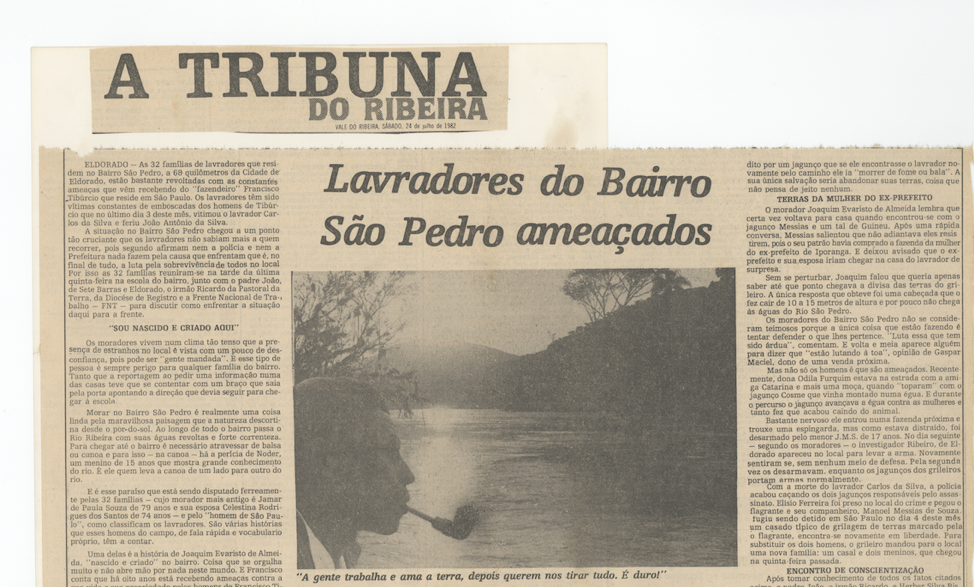 I learned about Carlitos da Silva’s story while conducting archival research at the Articulation and Advisory Team to Rural Black Communities of the Ribeira Valley (EAACONE, formerly MOAB, the Movement of Peoples Threatened by Dams), an Eldorado-based civil society organization that defends the territorial rights of quilombos residing in the Atlantic Forest of São Paulo state and Paraná. During my first trip to EAACONE in 2015, I found a dossier documenting the history of political activism for communal land rights in São Pedro, a village established during the 1830s by a fugitive slave, Bernardo Furquim, and his companions, Coadi and Rosa Machado, near the banks of the Ribeira de Iguape River. The dossier was the tip of the iceberg. For more than thirty years, MOAB/EAACONE’s staff has compiled historical documentation—property deeds, baptismal records, court documents, photographs, and oral histories—to strengthen the legal claims of quilombos to their ancestral lands. In 1994, the quilombo community of Ivaporunduva brandished land titles belonging to Gregório Marinho, a fugitive slave, as historical evidence of their long-term territorial dominion when its residents sued the Brazilian government for its failure to apply Article 68, a constitutional provision that accords land rights to the descendants of maroon communities. The lawsuit, the first of its kind in Brazil, paved the way for thousands of quilombo communities to enlist history and genealogical memory to demand collective land rights.

These archival materials documenting the history of the African Diaspora in Brazil are at risk. Government officials have enacted deep cuts to public education, museums, and state archives in the aftermath of the 2008 global economic crisis. Although the National Archives in Rio de Janeiro and the Public State Archive of São Paulo have digitized vulnerable materials, many archives and museums throughout Brazil have fallen into disrepair. The electrical fire that tore through Rio’s National Museum in 2018 destroyed priceless artifacts and historical patrimony pertaining to indigenous peoples and Afro-Brazilians.

Collections documenting underrepresented populations in Brazil, especially quilombos, are politically vulnerable, as well. In 1890, two years after abolition, finance minister Rui Barbosa ordered the treasury to burn all records related to slavery, in part to stave off the demands for the indemnification of slave owners, but also to suppress the historical claims to land rights and reparations that quilombola activists assert today. In 2019, President Jair Bolsonaro declared war on rural activists, pledging to amend the Brazil’s terrorism laws to prosecute members of the Landless Workers Movement (MST) and vowing never to cede “another centimeter” of land to quilombos and indigenous communities. Amnesty International has reported sabotage, arson, and hacking of human rights activists and progressive civil society organizations throughout Brazil. In light of the dire political situation confronting traditional peoples in Brazil over the past several years, and given EAACONE’s gracious support for my research, I wanted to give back. Then fate intervened.