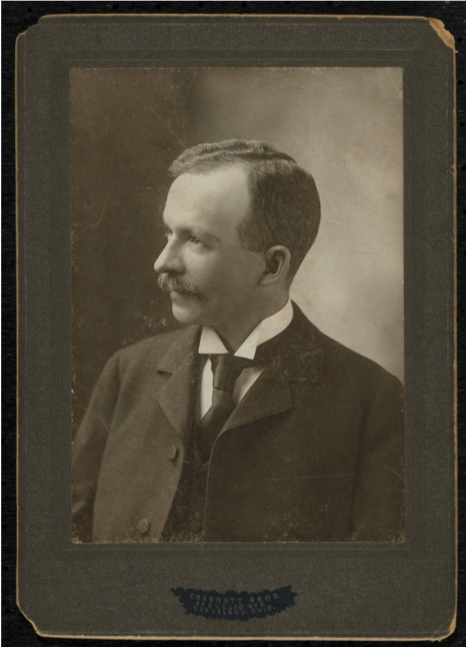 To mark the launch of the African American Writers Corpus 1892-1912 (AAW; beta release), this guest post by Dr Jimmy Packham introduces one of the key authors of the AAW corpus, Charles W. Chesnutt. Jimmy is a Lecturer in North American Literature at the University of Birmingham and is a specialist in gothic fiction, including Chesnutt’s early writing.

Charles W. Chesnutt (1858-1932) is one of America’s major writers of the late nineteenth and early twentieth centuries. He might readily be seen as a figure bridging the divide between a number of important literary movements from this period: from the substantial gothic tradition evoked by his early fiction, through local colour writing, into literary realism, and engaging at the end of his career with the emergent Harlem Renaissance, with whose activists and advocates he was politically aligned even as his own fiction was seen as old-fashioned and out-of-kilter with predominating trends in African-American writing.

Chesnutt maintained a career-long interest in the social standing of African-Americans in the US South in the wake of the Civil War and the failures of Reconstruction, and the particular modulations he gave to this interest developed alongside his experimentation with new literary modes. Chesnutt’s early gothic-tinged, dialect-heavy fiction—in work collected in The Conjure Woman (1899)—focused principally on the experience of African-Americans who continued to live in the vicinity of the plantations on which they were formerly enslaved, articulating their history through the ghosts and folktales bound-up with these spaces. Chesnutt’s second short-story collection, The Wife of His Youth and Other Stories of the Color Line (1900) and his realist novels moved away from the sites of slavery and turned greater attention to the specific experiences of African-Americans and mixed race individuals in a segregated South—The Marrow of Tradition (1901; now available in CLiC!), for instance, dealt with the rise of white supremacy and the 1898 race riot in Wilmington, North Carolina. (Chesnutt himself was seven-eighths white, but never chose to “pass” as anything other than African-American.)

In this way, we might consider Chesnutt’s interest in the particular forms and linguistics of certain genres as correlated to his developing socio-political interests, seeking new and more suitable forms to suit the particular stories he sought to tell: if a version of the  gothic (inflected by an overtly black cultural tradition through the presence of conjure) was the appropriate vehicle to explore the haunting legacy and continued influence of slavery on the lives of those who had been enslaved, realism permitted Chesnutt to locate his critique of the treatment of African-Americans and mixed race people in a more immediate and recognisable time and space.