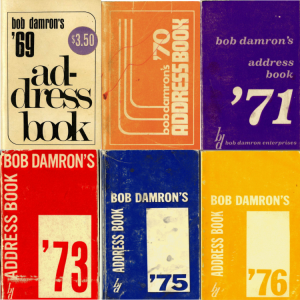 What is Mapping the Gay Guides?

Mapping the Gay Guides (MGG) is a digital mapping project that aims to understand often ignored queer geographies using the Damron Address Books, an early but longstanding travel guide aimed at gay men since the early 1960s. Similar in function to the green books used by African Americans during the Jim Crow era to help identity businesses that catered to black clients in the South, the Damron Guides aided a generation of queer people to identity sites of community, pleasure, and politics. By associating geographical coordinates with each location mentioned within the Damron Guides, MGG provides an interface for visualizing the growth of queer spaces between 1965 and 1980.

MGG’s first phase is focused on the American South. Over the last year we have constructed a data set based on all of the locations listed in the Damron Address Book for the following 12 states: Alabama, Arkansas, Florida, Georgia, Kentucky, Louisiana, Mississippi, North Carolina, South Carolina, Tennessee, Texas, and Virginia. Spanning twelve states and fourteen years this data provides a detailed portrait of gay life in the American South.

Why the Damron Address Books?

While the Damron Address Books were not the only gay travel guide or yellow page in the 1970s, they were the original and remained the gold standard, especially for men, through the 1990s. Aside from being the most popular travel guide, its the nature of the data inside that makes these guides an ideal source for a digital project such as this. An entry in Damron’s guide typically included the name of the establishment, an address, sometimes notes or warnings, and often an “Explanation of Listings” which were lettered designations describing Damron’s own characterization of the location. For example, a location may contain a “(D)” next to it indicating that it was a popular location for Dancing.

Read the full post and view the project here.