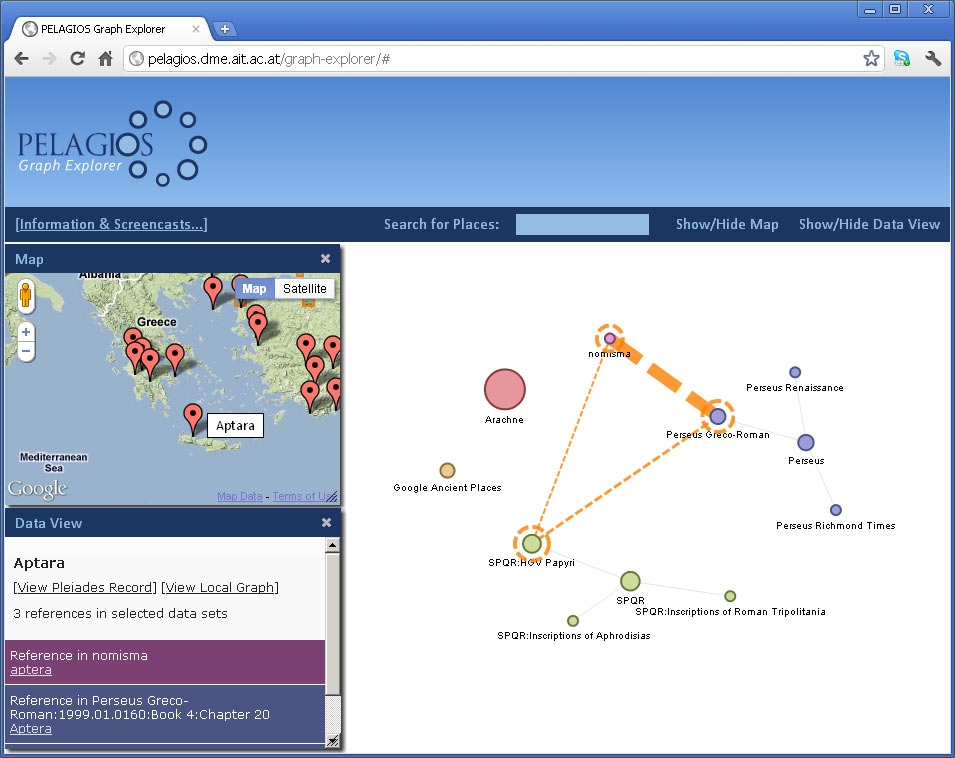 Having come such a long way in a short time (it’s hard to believe that the first phase of Pelagios began only last year), crystal ball-gazing is surprisingly challenging. On top of this, the UK and international funding landscape is rapidly changing, which may affect the kinds of research and development we can do in future. Nevertheless it is possible to identify some likely future directions of travel, as well clarify those services that we expect to sustain.

There are many directions in which Pelagios can be taken and we are actively exploring several of them. Two forms of data we would like to include more of are maps and geographic writings. Although extant spatial documents from Antiquity are relatively scarce, they are extremely rich in content (sometimes with thousands of toponyms) and the associations between them are still far from clear. By digitally annotating geographical texts and images such as Ptolemy’s Geography, the roman itineraries, the Peutinger Table, Strabo, Pliny, Pomponius Mela, and the Periplus of the Erythraean Sea, we would be able to explore the relationships between them in a far more powerful way. We could see at a glance the levels of coverage, as well as important omissions, or add contextual overlays to the documents themselves.

A second direction is to apply the lessons learned in Pelagios to other regions and periods of history. We are already in discussions about identifying gazetteers for late Antiquity and ancient and medieval China. The power of Pelagios is that it is equally applicable to any tie and place – it only requires that stable URI gazetteer be available. At a yet greater level of abstraction, the Pelagios framework can also be adapted to other conceptual entities, such as people, periods or canonical citations. Matteo Romanello is currently doing some very exciting work in the latter case which we have been following with interest. There is also a long running community discussion about creating a ‘temporal’ gazetteer’ of historical periods, although it’srelationship to both place and individual assertions by scholars makes this a challenging topic.

However the space which seems to offer most promise currently is references to people. URI authority files such as VIAF already list a large number of well-known people from Antiquity. Likewise there are forthcoming digital prosopographies that could potentially offer stable URIs for less renowned citizens of Antiquity. By establishing a common service for discovering these URIs the stage would be set to annotate resources with references to people. This is not merely of interest to those researching ancient social networks. Because life spans are relatively short (historically speaking), references to people (and especially multiple people) are a powerful way of identifying the temporal salience of a resource, in addition to its spatial relevance. That can be extremely helpful when filtering through the thousands of annotations associated with a city like Rome or Athens!

These are just some of the ideas we hope to follow up on imminently or over time. We hope you find them as exciting as we do, and if you have an idea of how Pelagios could help facilitate your own work then do get in touch – we’d be delighted to hear about it.

And what have we learned along the way? Three key lessons stand out:

We’ll look forward to learning further lessons in later phases of Pelagios, but for now it remains to thank the JISC Discovery Programme, all of our partners, and of course people like you, whose interest and support remains the lifeblood of the project. We’ll continue to post updates in the coming months and if you have data you’d like to link to Pelagios then do get in touch!
Read Full Post Here