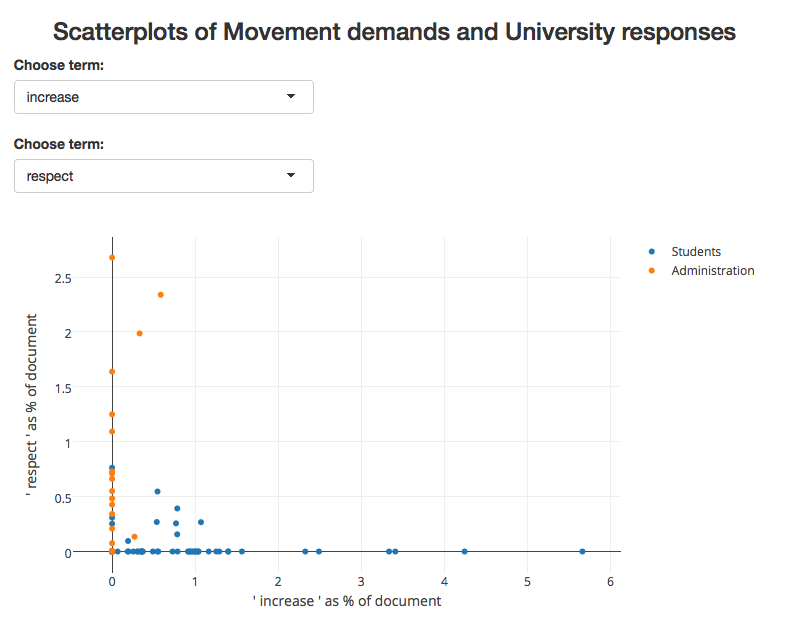 This is the first of a series of blog post applying text mining and other DH techniques to the evolving student protest movement demanding racial equality. What can DH techniques tell use about student demands and administration responses? Are faculty and students talking to each other or at each other? This project is a collaborative effort between Mark Ravina, a professor of history at Emory University, and TJ Greer, a soon-to-be Emory College graduate and history major.

The project emerged organically and fortuitously. In Spring 2015, TJ took Mark’s junior/senior colloquium on text mining, and then proposed a senior project focusing on the 2016 presidential primaries. Mark agreed, but after learning that TJ was active in the student protest movement, suggested a text mining project focusing on student protest petitions instead. TJ eagerly agreed, but suggested adding administration responses. TJ and Mark then scraped the data: the student demands are from www.thedemands.org/ but TJ supplemented these with administration responses. The current data set is 90 documents: 67 student demands and 23 administration responses

This collaboration has been exciting and productive, but has also raised multiple questions. As the protest movement continues to unfold, how can DH tools inform the movement, and how the protests can inform DH? Reflecting on our own subject positions, how should a fifty-something white professor ally and an African-American student activist work together, combining advocacy and analysis? Our goal, in these posts, is to toggle between these political and methodological concerns, including technical questions of text mining.

This first blog reflects our first preliminary results, but even at this early stage we feel comfortable with two declarations: one empirical and one political. The empirical observation is that university administrations are largely talking past students, employing a radically different vocabulary than that of student demands. Our political observation is that universities need to address student demands seriously and directly, even if that means admitting that some problems are deeply structural and that solutions will require decades rather than months or years.