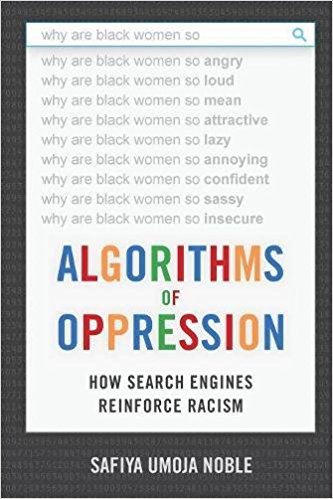 At DHNow we try to use our Editor’s Choice pieces as an opportunity to highlight debates and important scholarship related to the Digital Humanities. Below is a round-up of commentary on two controversial twitter debates related to Safiya Umoja Noble’s (@safiyanoble) forthcoming book Algorithms of Oppression: How Search Engines Reinforce Racism. The controversy began when the manager of the IEEE History Center’s Twitter account (@IEEEhistory) sent several tweets denying the argument and evidence of Noble’s book without reading the work. In a second separate exchange, twitter users questioned and dismissed the existence of racist data structures — a component of Noble’s argument about digital redlining in Algorithms of Oppression. Noble’s book is set to be released on February 20 and contributes to a growing body of scholarship on the issue of bias in computing and digital ethics. Below are links to two responses prompted by the twitter exchanges as well as a link to Safiya Umoja Noble’s talk at the Personal Democracy Forum in 2016 which serves as a preview of her forthcoming book.

Everyone knows what you post online is never truly gone, but rarely are attempts to scrub something from the web quite this ironic—or infuriating.

Last week, the Institute of Electrical and Electronics Engineers History Center tweeted out an apology to author Safiya Umoja Noble after one of its historians shared a glaringly insulting criticism of her work from the organization’s Twitter account. But it appears the IEEE History Center—which was established to help preserve information on electrical technologies—has since deleted the apology.

Why We Need To Stop Questioning Women of Color by Colin Rhinesmith:

After admitting and accepting that I was wrong, I discovered a few ways to move forward.

I began reading the work of Black feminist scholars who Safiya and other women of color were citing and discussing in their scholarship. Through this process, which continues today, I began learning that there are multiple ways of knowing about the world. By understanding the perspectives of women of color, I could begin to see why men continue to question women of color and why it needs to stop.

I also began to recognize that I, as a White cisgender heterosexual man from a privileged background in a position of power in higher education, can use the powerful platform that I have to work toward changing these stereotypes and addressing oppression in academia and beyond.

More recently, I have begun to assign Black feminist scholarship in my classes at Simmons. This is because, as Patricia Hill Collins (2000) explained, “It is more likely for Black women, as members of an oppressed group, to have critical insights into the condition of our oppression than it is for those who live outside this structures” (p. 39). Collins’s writing, as well as the writing of many other Black feminist scholars, can be an incredibly important starting point for library and information science students in learning to develop the tools, skills, and knowledge needed to challenge the oppressive systems and structures that continue to impact our profession and the communities we serve in harmful ways.

My hope in writing this post is that it will ultimately serve as a call to other men, like myself, to begin questioning not only what we know but how we know. More importantly, I hope this post will cause other men to stop questioning women of color and to start asking ourselves critical questions such as, “maybe what I know is wrong.”

Challenging the Algorithms of Oppression by Safiya Umoja Noble: