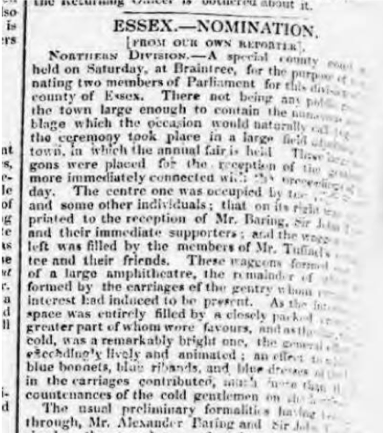 In this guest post, Miriam Helmers (University College London) draws on how different digital tools and sources to examine the relationship between Dickens’s journalism and his fiction. She reports very interesting insights into the writer’s use of “a fantastic kind of descriptive language”.

Charles Dickens was a reporter before he was a writer of fiction. This would be a truism – if it were true. Strictly speaking, yes, he worked as a parliamentary reporter from 1831-1834 and as a reporter for the Morning and Evening Chronicles from 1834-1836 before launching his career as a novelist. And yes, the detailed descriptions in his fictional work showcase his journalistic training. However, Dickens goes beyond the details in his fiction, and even in his early reporting, he already points to realms of unrealism. As one might expect from the genre, his early journalism does not contain many instances of figurative language; but when Dickens the detailed reporter uncharacteristically states that he cannot describe something, it may be that Dickens the imaginative writer feels that only a fantastic kind of descriptive language would be adequate – and yet would be inappropriate for him to indulge. He finds the outlet for that kind of detail in his fiction.

While I wished that I could have used the CLiC concordance tool (Mahlberg et al. 2016) to sift through barely-legible scanned versions of the newspapers from this period (see Figure 1), I was later able to use CLiC to find several examples from Dickens’s fiction that have confirmed some parts of my hypothesis.

My starting point meanwhile was the British Newspaper Archive (BNA). The BNA is a fantastic resource, containing millions of pages of newspapers dating from 1700. With a subscription, you can view as many articles as you need – although in the British Library Reading Rooms, you have unlimited access to the BNA for free! Certainly one of the perks of living in London. To look for specific articles, you simply enter keywords, or the date, or the newspaper in the advanced search and then continue limiting the search with added filters. This requires a bit of patience.